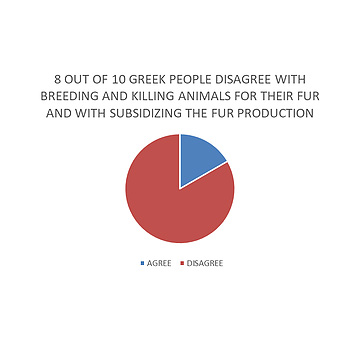 OPINION POLL: 8 OUT OF 10 CITIZENS OPPOSE THE BREEDING AND KILLING OF ANIMALS FOR THEIR FUR AND DON’T WANT THEIR MONEY TO BE SPENT ON THE CRUEL FUR INDUSTRY

Research conducted by METRON ANALYSIS, commissioned by the organization VeGaia and financed by Fur free Alliance, shows that 8 out of 10 citizens oppose the breeding and killing of animals for the commercial exploitation of their fur. The same survey also shows that Greek citizens disagree with the government’s policy of spending taxpayer’s money on financing the fur industry. The data was collected in a telephone survey conducted throughout the country in December 2018, from a sample of 1,200 people.

Both this survey and the increasing protests by citizens and organizations, show that public opinion opposes this cruel activity and the government’s continued support for the fur sector. This poll, is also in line with other European Members’ surveys, proving that the majority of European citizens condemn this brutality towards animals for unnecessary luxury products.

It is also important to mention, that during recent years, the number of fur farms and fur manufacturing facilities has increased in Greece, as a result of the government’s financial support for the fur sector from both national and EU funds.

This survey is also the best response to the fur industry’s unsuccessful attempts to include fur production in Greece’s National Inventory of Intangible Cultural Heritage. Greek people have spoken out, explicitly stating that not only do they not wish to protect this activity, on the contrary they wish to abolish it.

Greek citizens have also sent a message to the Deputy Minister of Rural Development and Food, who recently restated the Ministry’s full support for the fur industry after the MP Mr Nikolaos Nikolopoulos submitted our petition to the Ministry, claiming that fur farming is a legitimate activity which has attracted a great number of investors since 2011.

Whilst we certainly agree that fur farming is a legal activity, we would like to point out that it was also legal in all of the other Member States who decided to ban it on ethical grounds after considering their citizens’ concerns and after realizing that killing animals for the commercial exploitation of their fur for luxury products is entirely unacceptable in a civilized society. Regarding the investments in the fur sector, we would like to ask her what the return on these investments actually was, and more importantly with whose money these investments were made?

All the data supports the fact that the dominance of the fur production has not helped the region of Dytiki Makedonia (West Macedonia) to break out of the economic deadlock it faces. On the other hand, there are many opportunities in both the agri-food sector and in tourism which could provide jobs and healthy, sustainable development, in the region.

We call on the government to respect public opinion and the growing awareness regarding animal suffering in the fur trade and as a first step to immediately rescind any and all subsidies provided to the fur sector. We also urge them to take immediate action to ensure that no other fur farms will be established or expanded. It is high time the Greek government addressed this crucial issue to bring it in line with other member states that have already banned this cruel, outdated activity.