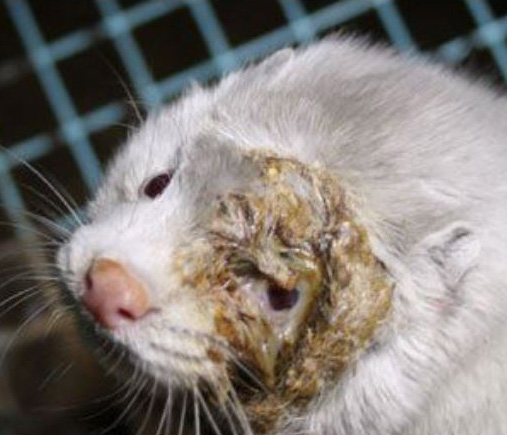 Through letters to the ministers, MPs and Members of the European Parliament, the Greek organization VeGaia has protested against an increase in the number of fur farms in Greece (from 43 in 2011 to 131 in 2018) and the state aid which the fur industry receives from national and EU funds.
The Greek government is financing the establishment of new fur farms, the expansion and modernization of existing ones, fur manufacturing and pelt processing facilities, as well as promotional activities such as assisting fur companies in taking part in exhibitions and trade missions aimed at of increasing sales.
Data from the Hellenic Statistical Authority show a sharp decrease in Greek fur exports, proving fur production to be not only an outdated economic activity but also an unsuccessful investment choice.
Furthermore, reports compiled in the Region of Dytiki Makedonia (West Macedonia), where the fur is being produced, show tourism is at the lowest level in the country. This clearly proves, the devastating impact of the fur industry on the region, by preventing other economic activities, such as tourism, from being developed, which could create a wealth of new jobs as an alternative to this outdated industry. It is important to note, that Dytiki Makedonia consistently has the highest unemployment rates in Greece and, according to Eurostat, is also the first on the list of all the Regions in the EU. This means that the fur industry which has reigned supreme in the region for so many years, not only failed to tackle the unemployment, but on the contrary is actually responsible for the deplorably high unemployment rate.
Despite the fact that many major fashion designers have stopped using real fur, increasing numbers of consumers are refusing to buy it, and that fur exports have fallen dramatically, making the fur trade an unsuccessful investment, the Greek government insists on wasting EU taxpayers’ money on financing this cruel, outdated and dying industry.
European citizens have a right to expect that their money is correctly spent. As the majority of EU citizens oppose fur production, and many Member States have either banned, or are in the process of banning it, the Greek government has a grave responsibility to ensure that European taxpayers’ money is not be wasted in supporting this industry.
Sustainable development, which is the professed goal, not only of the EU but surely of every civilized society, means not investing in the past, but rather of, embracing the future and preparing for tomorrow, through a pragmatic appreciation of contemporary mores and current trends, not by slavish adherence to the archaic practices of yesteryear.